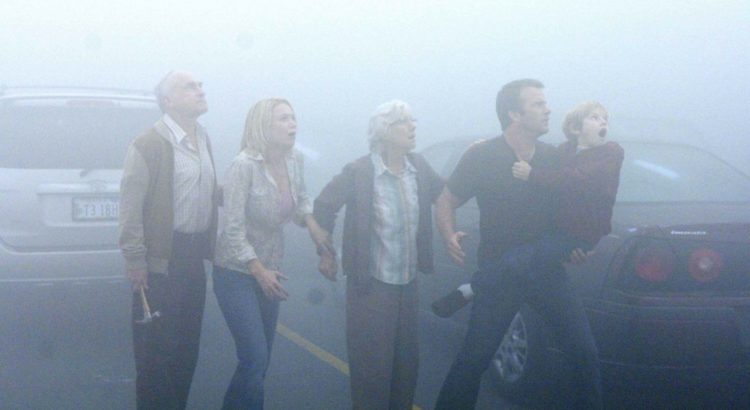 Director Frank Darabont adapted Stephen King’s novella The Mist in 2007. The Mist is the fourth time writer-director Darabont directs a King story others being the short subject The Woman in the Room, The Shawshank Redemption, and The Green Mile. When The Mist was released on Blu-ray and DVD it was accompanied with a identical but a black and white version of the film. The Blu-ray version also included an introduction by Darabont:

“Hey, this is Frank Darabont. Welcome to the black and white version of The Mist. I always had it in mind actually to wanna do The Mist in black and white. Because there is something about Stephen King’s story that is a bit of a throwback. In fact even he says in an afterword he once wrote when he was writing the story, conceiving the story, he was inspired by those old black and white, Bert I. Gordon-inspired monster movies of his youth.

That I think has planted a seed in my head as well as many of the fans of the story through the years. Because I’ve heard that from a lot of people, wouldn’t it be cool to do The Mist in black and white? So, I just kinda wanted to do that. But it’s a hard argument to make with the studio, because not many people are into black and white these days, which I think is a shame. Youngsters especially don’t wanna see anything in black and white. They think it’s old-fashioned or out of date or it doesn’t look real. I heard that one. That to me is what makes black and white so very cool. It doesn’t look real. Film itself isn’t real. It’s a heightened reality. It’s manipulating light through a lens, you know, to create a heightened recreation of reality. To me black and white takes that even one step further.

It gives you a view of the world that really doesn’t exist in reality and the only place you can see that representation of the world is in a black and white movie. So, to me this has always been a bit of a throwback to that mid-sixties, Night of the Living Dead, pre-color, Ray Harryhausen-era of film. And I always wanted to do it in black and white. Luckily, nowadays we don’t actually have to make that choice. Nowadays, we can decide that we are going to put a black and white version on the DVD because we don’t really cut a negative anymore what’s called a D-I. Coen Brothers did this with The Man Who Wasn’t There. They shot the movie in color, but they actually released it in black and white, which I think was a fantastic looking film.

Source: Introduction by writer/director Frank Darabont on The Mist Blu-ray