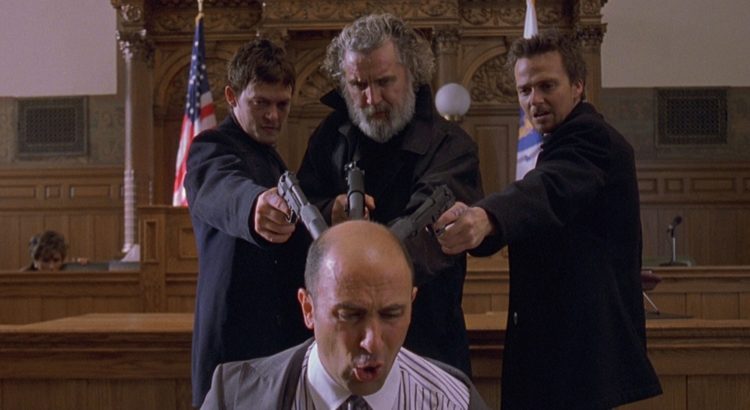 The cult favorite The Boondock Saints has a large following since its initial release in 1999. In 2006 writer-director Troy Duffy returned to his debut to include 5 seconds that were cut out of the original release to ensure R-rating for the film in the US. Originally it received NC-17 rating, and with that rating Blockbuster Video wouldn’t stock it. The unrated cut was originally released as a stand alone release in 2006. The Blu-ray release includes both the theatrical and unrated cuts.

IGN interviewed Duffy in 2006 when the unrated cut of The Boondock Saints was originally released. Although Duffy talks about the difference between the theatrical cut and the unrated being minutes, the time difference is only 5 seconds.

IGN DVD: Maybe just to start off you can talk about the differences between this ‘Unrated’ version of the film and the original cut.

Troy Duffy: What it is was my first cut of the film. It got rated NC-17, and there’s only a few minutes difference, but it’s going to be very noticeable to Boondock fans and it’s only differences in scenes where people die. There’s a lot more blood work, and a lot more sort of slow-motion gun ballet violence in it. I think it’s only about two and a half minutes longer than the regular version. But cutting those scenes, when we got the NC-17 I challenged it with the MPAA. You go before this arbitration board called CARA and you plead your case and MPAA sends a representative over to plead their case and you plead your case and they screen the movie beforehand in front of, you know, nine 60-year old housewives that are just going to basically support whatever the MPAA wants to do. Anyway, I had to cut it to an R to get distribution; we had a deal with Blockbuster and they only release R [-rated movies]. So cutting it was like slicing up your baby; all of those shots, especially the slow-motion violence and the blood and all that, those were hard-earned shots – well-orchestrated, everybody on set had to contribute to getting those correct, and it was real hard to cut those out. I’m glad Fox is releasing this version because it’s the one I originally intended. So the difference though only minute-wise is slight, it’s going to be very impactful for the fans.